Situated in the mighty Okavango Delta

Your Safari Lodge in Botswana 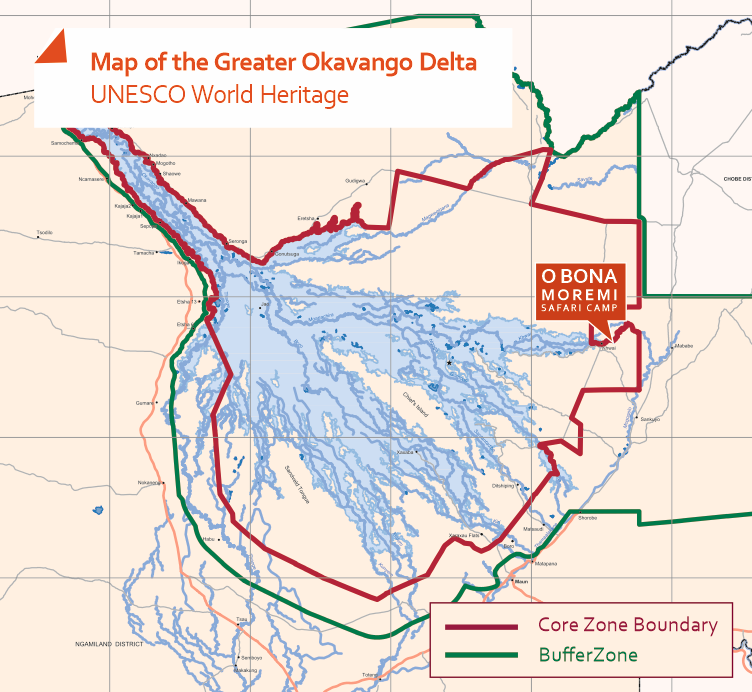 The perfect Location for a Lodge in Botswana

With only 3.5 hours drive from Maun the O Bona Moremi Safari Lodge is located only a stone threw away from the Moremi Game Reserve in the bordering Khwai Concession. The eponymous Khwai River forms a natural barrier between Khwai Concession and Moremi Game Reserve. The Khwai Concession itself contains 180 000 Ha and is sandwiched between two of Botswanas most prominent Game Reserves – Savuti and Moremi Game Reserve. As there are no fences between the three safari destinations all of the inhabiting animals including lions, leopard, buffalo, elephant, hippo, zebra and various antelope species are able to migrate throughout the landscapes. Khwai´s idyllic landscape is determined by wide open flood plains, green riverine forests and numerous small river sows.

Although the similar flora and fauna can be found in Savuti, Khwai and Moremi Game Reserve, Khwai is known for exceptionally good leopard sightings. Furthermore it is one of the best places to observe the endangered wild dogs. One explanation could be that the lions as the biggest rival of both leopard and wild dog rather stick to the Moremi Game Reserve. As the Moremi Game Reserve is only a 10 minutes drive away from our lodge, safaris and full day game drives in Moremi are possible. Given the fact that O Bona Moremi is located in the Okavango Delta Core Zone, we also offer boat safaris on tributaries with traditional Mokoros. Additionally we give guests the opportunity to experience the lifestyle of an original local community living in the heart of Big Game Country by visiting the little village of Khwai which is immediately adjacent to the north gate entrance of Moremi Game Reserve.

● 3.5 hours from Maun
● Easy road and Safari drive to the Lodge (Note Seasons!)

● Access via Air
● Scenic flights to and from Maun

Note for Self Driving Guests

Khwai should only be accessed with a 4×4 vehicle in all seasons. Especially in the rainy season and sometimes in the mid season a 4×4 vehicle with snorkel is need as deep water crossings are inevitable. Please inform yourself about the road conditions and the weather before accessing our Safari Lodge or contact us. Alternatively transfers by plane or vehicle are possible from and to Maun.

Directions to our Lodge in Botswana

NOTE SEASONAL DIFFERENCES
– Head out towards Moremi
– After 50km turn right as the road splits
– Usually no water crossing is needed before entering Mababe Village
– If the road is blocked with water take the detour to the right
– After passing through Mababe Village cross the bridge and stick to the left road for another 39km
– After coming across a Khwai Village Sign turn left after 100m into the first road
– carry on for another 500m and take the first road on the right
– After 500m there are two roads to your left, ignore these and keep right
– After another 300m you keep to your right and then turn right immediately
– Follow this track and you reach O Bona Moremi Safari Camp.

– Head out of Maun towards Moremi
– After 50km turn left as the road splits
– Carry on until you come across the Entrance Gate (park fees need to be payed here)
– after passing the gate stick right until you hit the main cutline to North Gate and carry on left
– ask at the Gate for a Map or Directions if help is needed
– the Cutline will bring you directly to North Gate
– Exit North Gate, cross the bridge and go through Khwai Village
– Stay on the Main road
– just 100m before the Khwai Village sign turn right – carry on for another 500m and take the first road on the right
– After 500m there are two roads to your left, ignore these and keep right
– After another 300m you keep to your right and then turn right immediately
– Follow this track and you reach O Bona Moremi Safari Camp.

Explore the Wildlife of Botswana